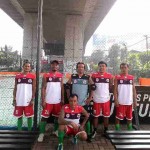 On 16 until March 17 2016, Bali Health Foundation (Yakeba) had the opportunity to host follow Tournament League Of Change held in Bandung by Rumah Cemara. This tournament will select eight players who will be play at the Homeless World Cup in 2016 in Glasgow Scotland.

Selection of this time same as the previous year. All the delegates from all regions mixed together, then split into 10 teams. Mixtures of various teams coming from all over the Indonesian region of which there are seven provinces throughout Indonesia. Bali, West Nusa Tenggara, East Java, Yogyakarta, Special Capital Region of Jakarta, West Java and Bangka Belitung. And of course, all the participants came from former addicts and marginalized people.

“Until the second day, this whole team of 1 to 10 are still undergoing the process of the game. And until now they have not heard or roughly anyone of which areas have entered into the national team to be dispatched to Glasgow Scotland.” said the Patrician Gregorius as the manager team Street Soccer team of Bali.

But on the whole, all the team of representatives to follow the process of the game with enough passion and sportsmanship. With the spirit of togetherness and spirit toward better to build hope and unify the world, this selection can take place properly.

Hopefully, from the selection of this casting can be obtained best player was the representative of Indonesia to follow the Homeless World Cup in 2016 and could bring the good name of Indonesia in the international arena.